"There are no Limits"

Imagine you were CEO and you were working with one of Europe’s largest energy suppliers. And you have only seven employees. Who are you?

“Hi, I’m Mads,” says Mads Miltersen with a big smile as he opens the door to the functional two story building in an industrial area of Falkenberg, a picturesque city on the Swedish southwest coast that under recent years has evolved from a summer beach paradise to becoming a national hub for renewable industry.

Miltersen has been the CEO of German energy giant EnBW’s Swedish daughter for a little more than a year. And growth is his main claim. “Here are really no limits,” he says. “Sweden has great demographics for renewables,” he says. “The country is so big, with large rural areas. And the wind is very reliable.”

The man knows what he’s talking about. Born Danish, Mads grew up in a significantly smaller country than Sweden. Denmark is known to have the highest density per capita of wind turbines in the world. As a matter of fact, Sweden’s neighbor to the west produces more than 100 percent of its electricity supply by wind power on more than fifty days a year. And Mads is a true renewable energy believer.

“I need to work with purpose. That’s why I want to influence the energy transition,” Mads says. “In Sweden, our industry is still in the process of maturing. It is new and hungry companies like us here in Falkenberg that are pushing professionalization. There are no limits for growth and possibilities.” According to Mads, Sweden has been a bit of a late bloomer in terms of sustainability. “When I started my career, Denmark was the place to be. But today, Sweden has taken over in the global sustainability race with the goal of being completely carbon neutral by 2040.” Mads believes that this is due to Sweden’s cultural heritage: “People here have always been living by, of, and with nature. In a way, renewables in general and wind power in particular fit like a hand into a glove, as a Swedish proverb says.”

And Mads is getting a tailwind from his German parent company: EnBW was one of the first major energy companies to consistently align itself with the opportunities of the energy turnaround as early as 2012. Since then, the company has fundamentally expanded its generation portfolio and is now one of the drivers of wind power on land and at sea. Only a few days ago, EnBW consolidated this sustainable corporate orientation with an ambitious target: It wants to be completely climate-neutral by 2035 at the latest.

“We want our team to grow”

In many European countries, wind power has been stagnating during recent years. Not so in Sweden. On the contrary, wind power is expected to continue its growth exponentially. And EnBW Sverige wants to secure more than just a bite. “The best with being CEO for this company is that it meets my passion for growing business,” Mads Miltersen explains. “We are a small, young and highly dynamic team here in Falkenberg where everyone takes many responsibilities. We want our team to grow, and we want to exceed in all steps of the value chain. That means: We develop greenfield projects from scratch, we build projects from other developers, and we buy wind parks that are already on the grid. And we have a strong mother who is covering our back with her expertise and strength”. 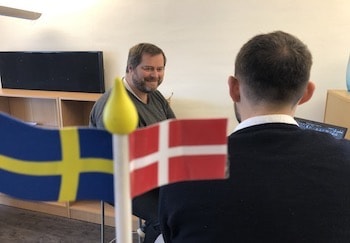 That is what has made EnBW Sverige one of the fastest growing companies in the business in only a little more than a year. “There two key factors for the speed of our development: One is the dynamic spirit of our team, with open leadership and a clear management by values. The other is that we have our mother company, EnBW, behind us.”

EnBW is one of Europe’s largest supplier of energy related products and services with more than 20 000 employees mainly in the southwestern German federal state of Baden-Württemberg, the home of other industrial giants such as Mercedes-Benz, Porsche, or SAP. Baden-Württemberg is in the second legislative term of a green party government. EnBW has been given the task to be a leader of the Energiewende, Germany’s world famous transition to a renewable and decentralized energy system.

According to Miltersen, the combination of EnBW Sweden and Germany is ideal. “We are an independent company that can act locally. But we have the full scale of the competences of the German colleagues. It’s a huge benefit for us in Sweden that we can utilize the competences from the Stuttgart. At the same time, we Swedes take part in our mother’s international mind set. We have cross-border cooperation with our German colleagues on a daily basis on various tasks.”

Obviously, EnBW has a German DNA. “But that doesn’t only mean world class engineering,” Miltersen explains. “In the energy industry, Germany also stands for decency, responsibility,  and long-term thinking,” Mads Miltersen believes. “Our German mother has a long heritage of being a good partner for local communities, creating local advantages. That’s how they have grown in their home state. And that’s exactly our business model in Sweden. We operate our facilities for many years. EnBW shares our ambition, and their professional and financial power gives us the strength to execute this ambition.”

“What could be more Swedish?”

As a matter of fact, the company has a filled pipeline with secured land lease agreements for greenfield projects as well as partnership- and collaboration agreements in several parts of the country. “We have literally too much to do!”, says Mads Miltersen. “We need more people who share our passion for renewables.”

After all, and despite its international scope – EnBW develops and operates wind power in Sweden, Germany, France, the US, Turkey, and Taiwan – EnBW Sweden still is a Swedish company. “We have a Danish CEO,” bursts Miltersen out in laughter, “what could be more Swedish than that? We eat our knäckebröd with cheese at ten sharp!”