An Energy Transition for All

Is there anyone in Germany who is openly opposed to climate protection and renewable energies in 2019? Hardly. But benefits and burdens are unequally distributed – between rich and poor, West and East, old and new players in the energy system. Since its foundation in 2015, the Energy Avant-Garde Anhalt has been committed to giving the energy system a secure foothold through regional value creation. This goal unites a many-voiced choir of the most diverse interested parties in Anhalt: citizens, entrepreneurs, local politicians, regional energy suppliers.

Albert Einstein once rhetorically asked why no one understood him but still everybody liked him. With the energy transition it seems to be exactly the other way around: No less than nine out of ten Germans consider it necessary in times of climate change and environmental destruction. According to a recent study by the Potsdam Institute for Transformative Sustainability Research (IASS), this is five percent more than in the previous year. But at the same time, the energy revolution is becoming increasingly unpopular. Citizens not only feel disturbed by wind power plants and new power grids in the landscape. They are particularly annoyed by the socially unjust distribution of the burdens and benefits of the energy system transformation.
It’s not just about the environment and the climate

In Saxony-Anhalt it is particularly clear why and how the energy revolution is making itself unpopular: “‘We have a lower purchasing power than in the western Länder of Germany. This is why households are less willing to invest in solar cells on their roofs. Bavaria is top of the league and we are rather flop,” says Thies Schröder, chairman of the Energy Avant-Garde Anhalt.

Schröder is not surprised that the energy revolution as such is enjoying great acceptance. For him, it is the implementation that is the subject of criticism. “The fate of the energy system transformation is not only determined by issues such as ecology and climate. It’s about justice,” says Schröder. “As Energy Avant-Garde Anhalt, we started thinking about the social factor early on. Wealthy people benefit from subsidy programmes and tax breaks when they invest in photovoltaics on the roof of their own home. They become self-sufficient and can even resell part of their production. But in the end, all citizens pay for the conversion of the energy system. Even the dispossessed – through the price of electricity and fees. And this package is becoming more and more expensive”.

When it comes to finding a common advantage for different interest groups, one likes to speak of a win-win situation. “But the typical citizen in our region has all the disadvantages: many wind turbines in front of your front door take up the landscape. And because the grid has to be modernized and expanded due to the high proportion of renewable energy, grid fees have also risen significantly. So instead of a win-win situation, we have a win-lose situation,” says Schröder.

Of course, the energy avant-garde Anhalt does not yet have a magic formula for getting all citizens on board for a major social revolution. “But that’s necessary,” says Schröder, “because we want an energy system made of 100% renewables as soon as possible.”

“Transparency and information are very important factors here. Many people simply can’t see how they can help shape anything at all. We want to and must use individual and concrete examples to show how citizens can influence immediate decisions. The aim is always to ensure that both the region as a whole and the individual citizen benefit”.

What is – and what could be

This is not possible without local politics and administration. The Energy Avant-Garde Anhalt has developed a “Stakeholder Empowerment Tool” for this purpose. At the core it is a digital energy atlas that enables local politicians, project planners, planners and all citizens to see what is and what could be. For Thies Schröder, the primary concern is to achieve a better balance of interests between all those affected by the energy system transformation.

“On the basis of statistics, the digital maps show how and where the energy system transformation has progressed in Anhalt: locations of the various generation plants, size of the sites, generation, load profile. But they also show which areas are not available due to landscape or monument protection regulations,” explains Schröder.

But that’s not all: if you have your own scenario for the future in mind, you can test it here. Where can wind farms still be built at all? Are the existing turbines suitable for repowering? What happens if more storage capacity is added, stricter energy saving targets are set, or more roof space is used for PV? “Visualizing different scenarios on questions of energy storage, efficiency, repowering, etc. helps to find out whether one should actually be for or against something.

The Energy Avant-Garde Anhalt is also concerned with the topic of energy efficiency. “As part of one of our projects, for example, we are showing how companies can make the waste products from their own production available to other companies. This can involve wood residues, waste heat, or cooling” explains Schröder. “Our project officer Rolf Hennig helps to identify suitable partners and funding opportunities, and together with them brings the relevant applications to the decision-makers.

Hennig has been specially trained by the Chamber of Engineers of Saxony-Anhalt to become a municipal energy adviser.
Fossil energy created jobs – what will the energy revolution bring?

“For many people in Saxony-Anhalt, the energy revolution was a threat”, says Schröder. “The traditional energy industry played an important role in the lignite region and strongly shaped its identity. Fossil energies required a great deal of work to extract coal from the earth, transport it to power plants and burn it there. This has brought many well-paid jobs into the region and shaped the region for over a century. People are afraid of losing this plus factor.” 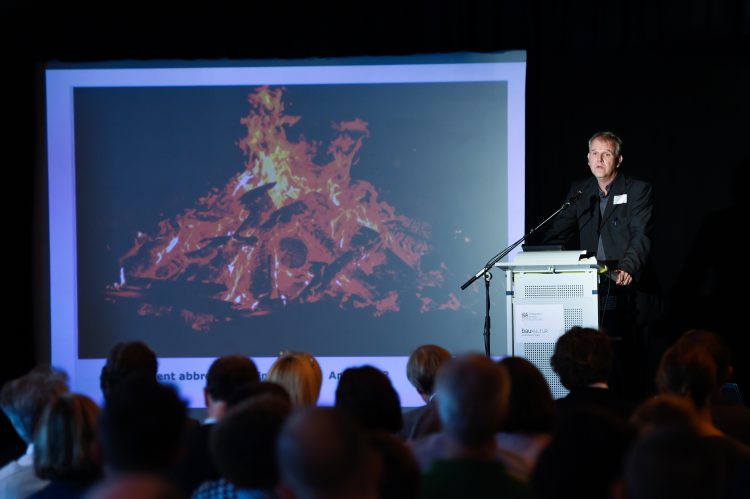 Thies Schröder: “Our strength lies in the fact that we discuss controversially and always remain able to take a position.”

“Many of us in Anhalt rightly ask ourselves: Who owns the wind turbines, who earns money from them? What will become of our UNESCO World Heritage Site? What will become of species protection, forests and nature? We want and must ensure that all citizens not only experience the disadvantages of the energy system transformation, but also the economic advantages.”

In doing so, we also look beyond borders. As an example, Schröder describes the European “Intensify” project, in which the Energy Avant-Garde is involved. Among other things, the project looks at the development of models for citizen activation and financial participation in the energy system transition for the purpose of climate protection. “We want citizens to benefit more financially in the future,” he says. “That the costs and benefits will be distributed differently”.

“Within the framework of “Intensify” we have learned how so-called 50/50 models work, which exist in Portugal and Italy, for example. Schröder explains in an exemplary way how a school can use its roof areas for PV in conjunction with insulation to save energy: “This reduces both greenhouse gases and costs. And that’s good! In Portugal or Italy, the incentive is that as a school I can keep a share of the savings and use it freely, e.g. for a better educational offer. In Germany this is not possible so far. That must become better and simpler, so that the decision to go such ways becomes easier.”

Organisations such as the Energy Avant-Garde Anhalt are often exposed to the suspicion of having a certain political colour. Schröder vehemently contradicts this.

“We are not a single issue association or a lobby organisation for a particular economic model. On the contrary, we are a leading non-governmental organization in important questions of the energy transition. The renewable and digital energy landscape of the future requires a civil right to co-determination and participation in the value creation. Our strength lies in the fact that we discuss controversially and always remain able to express a position. Our weakness is that we we work on topics that are not always easy to communicate. We are different from the others and a bit free-floating. A kind of Chaos Computer Club*,” Schröder describes the Energy Avant-Garde with a wink. “But we are also trying to connect with other existing players. From this perspective, we are perhaps more of a public education centre – public, broadly based. We connect public and private interests, companies, financiers, municipalities and citizens.

*The Chaos Computer Club e. V. (CCC) is Europe’s largest association of hackers. For more than thirty years they are providing information about technical and societal issues, such as surveillance, privacy, freedom of information, hacktivism, data security and many other interesting things around technology and hacking issues.